–A THWARTED dream of mine has been a print show exhibiting the sketches that inspired the final woodcuts. Such an exhibit would rightly express the origin and intent of the printmaking process–the small black and white sketches revealing one end of the color woodcut spectrum.

Such ruminations remind me of the importance of the sketch, not only as an aesthetic end in itself, nor as a means to a final work of art, but as an expression of an artist’s journey. To discover who we are as artists is to find those aspects of our creativity which are indispensable. I recently rediscovered that the sketch is not just something that gets buried in a painting but an elemental part of my process–and needs to be fostered and preserved.

A recent book, Adolf Menzel, Drawings and Paintings, is an excellent reminder of one artist’s devotion to the art of the sketch. This volume reminds me of cherished journals of Da Vinci, Michelangelo, and Van Gogh–which I poured over as a young student. The selections, along with a fascinating introduction, are by James Gurney, an artist whose mastery of the field sketch, as well as his current focus on gouache, gives him unique insight into Menzel’s methods and motivations. 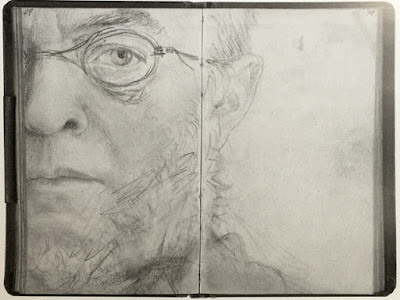 Gurney makes many salient points, one of which is that Menzel’s approach to the sketch and his choice of subject matter presage the more intellectual view of the modernist movement. A prime example is a penetrating, seemingly anachronistic portrait, which bisects Menzel’s face. Other fascinating examples are a decidedly modern looking sketch of row houses, a factory with a smoking chimney, and the interior of a steel mill–all masterfully depicted with an unromantic, analytical insight.

Menzel’s subjects range from candid to formal portraiture–from the sublime to the mundane. One example of the latter being an odd perspective of a bicycle wheel. The depictions are authentic and, we assume, pictorially accurate, without partaking of narrow optical precision. Some of the sketches were drawn from memory, exhibiting an astonishing visual acumen. As Gurney explains in the introduction Menzel was not tied to strict interpretations of reality but allowed his memory to modify the more academic approach of his peers.

There are 130 images, of which 32 are in color. An addition I particularly enjoyed as a printmaker are 20 prints at the end of the volume. Identified in the text as woodcuts or wood engravings (to my eye they are almost certainly metal engravings) they demonstrate that Menzel’s keen observations translate well into other media.

This book is a welcome addition to my library and a refreshing reminder of the role of the sketch in my own process.