Skip to content
AS I WAIT for my new studio to be completed I decided to reconfigure my old studio  for painting experimentation. I removed my couch and added a set of four fluorescent lights to create an area for painting abstracts on the floor. I have since made acrylic pours onto a plastic drop cloth. I created complex textures by adding a variety of thickeners to the acrylic pours. So far I have experimented with plaster of paris, chalk, and aluminum hydrate.

I initially worked on one basic composition but made multiple pours, peeling up the acrylic skins, and reapplying them to the main composition. In some cases I would crack brittle applications and reassemble them simultaneously soaking the application in acrylic binder to reinforce the integrity of the lamination. In between laminations I would glaze, sand, and scumble the underlying surface.

The process was lengthy but I slowly built up a rich patina of texture and color. Eventually I had a painting worthy of exhibition so decided to add a final coat of acrylic medium to increase the film integrity and give a uniform finish.

When the final coat of acrylic medium dried I discovered I had made a bad choice–the dried brush strokes created a conflicting pattern with the previous harmony of texture and color of the unvarnished surface.

I decided it is better to adjust my thinking and allow everything to be an experient–one step toward a creative solution–than waste valuable energy berating myself for wasting time in so-called failure.

I may see if I can salvage the painting by applying a thinner coat of Clear Tar Gel, thereby softening the painting’s busy brushstrokes in a layer of resin-like gel. But whether or not the painting is salvaged it will not be a failure–just another step forward in the creative process. 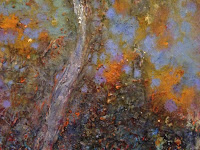