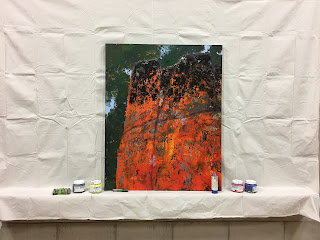 –I transferred my acrylic supplies to my new studio in the hopes of doing some large abstract landscape acrylics–even though I don’t have my gas fireplace installed yet. The temperature outside is around 10ºF (-12ºC). I tried to work despite the temperature, dressing in layers of clothing to ward off the bitter cold. I had two space heaters going full blast, but they still weren’t enough to combat the winter chill. My efforts were defeated and after five hours I retreated to the warmth of my house where I spent the next two hours trying to warm up.

I was going to film my progress as I painted but only completed a six-minute intro. Despite the cold, I pushed the painting forward without filming so this segment remains a one-off and will not have a sequel. I thought the idea of using an old acrylic painting as a point of departure for a new painting might be of interest to some, so I posted the video below. During the painting process, I did have good results with a painting medium made by Liquitex called Liquithick Thickening Gel. You mix the medium with acrylic paint and the paint gets remarkably thicker. It’s quite interesting and I wish I could buy it by the gallon (although a little goes a long way).

I thought the video might be a good test to see how my Udemy course might be received. The new studio has superior acoustics and lighting and has the potential for superior audio as well as video. Overall I thought the audio was an improvement over what I’ve produced so far.

Painting in my new studio was an interesting experiment–the light is amazing, but unfortunately, I need to get that fireplace installed before I can move forward with the Udemy class. Patience is a virtue–and a necessary one for artists. Let me know what you think of the video. I hope to have more soon.


Using a failed acrylic as an underpainting from Brad Teare on Vimeo.