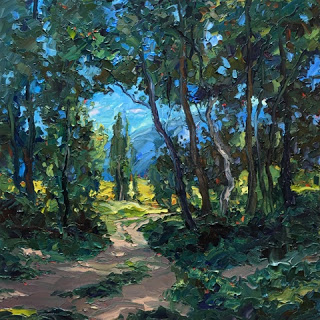 –I HAVE often said in my posts and Youtube videos that the color it looks like is the color it is. Except when it isn’t.

Like I mentioned while writing about color temperature, sometimes it’s complicated. The original context of my use of the above phrase was determining the color of pigments in tubes. If you squeeze out a blue and it looks warm, for your purposes, it is warm.

But what would you do if you wanted to paint the green square? Most people will see the large square as turquoise with the smaller square having a slightly pink tint. However, as you may have guessed, the small square is actually a shade of gray. This phenomenon is often called a field effect (read more about it here). If you painted the small square by mixing pink, you would have difficulty replicating what you visually experience. Not until you realized you needed to replicate the field effect, by using a shade of gray, could you portray the color accurately. 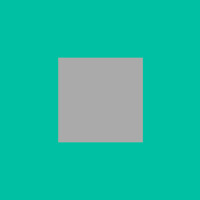 One problem painters often have, including me, is using too bright of green for foliage. This is especially true in Spring when painting outside. I see brilliant green and squeeze out some Thalo Green and add Lemon Yellow. It practically glows. I tell myself that is the intense color I’m seeing. It makes a brilliant green, and my brain tells me that’s what I need. But again, its more complicated than that.

I once went to an exhibit of dozens of Maxfield Parrish paintings and saw his originals for the first time. His work is extremely realistic while pushing the boundaries of color brightness (or chroma) to the maximum. It’s an interesting combination since I usually associated highly realistic paintings with a grayer palette. On closer inspection, I noted that Parrish used a myriad of complimentary speckles to introduce field effects, almost as if he were introducing an impressionist effect on a microscopic level.

This technique allowed Parrish to achieve maximum chroma within a realist form. I have since detected a similar technique with other painters who get the same effect by different means. One painter allows color to build up in the ferrule of his brushes and squeegees out these shards of random color as he adds strokes of paint.

Adding random specks of color is one solution to the excessive green problem. But a better solution is to add just the right complement. I contend that if a painter is using color well, they are using some form of field effect, even if like Parrish, it’s on a nearly imperceptible level.